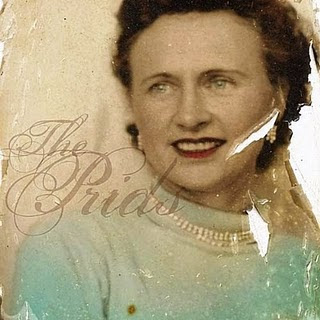 The Prids have generated a good deal of buzz around themselves over the years with two excellent full length releases, Love Zero (2003) and Until The World is Beautiful (2006), as well as a handful of stellar EPs. Based in Portland, Oregon, the band is known for their unique blend of dark post punk and shoegaze elements.


The band released their first EP in 2000, and one thing I can definitely hear over a decade of their releases is evolution. A lot can happen in 10 years, and their back catalog has an almost narrative-like growth in sound and lyrical content. 2 years ago, the Prids were in a very serious car accident driving home from a gig, destroying a good deal of their gear; thankfully, the band members themselves were spared (though some were injured). This was an unexpected set back for the band, but they held fast to their vision. Their newest LP, Chronosynclastic, is also their first release since the accident, and one thing rings out beyond all others on this album: triumph. The Prids are known for their dark and despair tinged sound, a defining characteristic that is still in place on Chronosynclastic, but I hear something new here - hope and a love of life. Triumphant in both sound and scope, and embracing a dreamier sound and softer edge than before, Chronosynclastic is the Prids' best release to date.

The album opens with "Hide Your Thoughts", a gorgeous track that swells with huge melodies and swirling guitar. The lovely vocal harmonies Mistina La Fave and David Frederickson create together are a testament to classic dream pop. In fact, more than ever before, this new record makes use of male/female vocal harmonies, expanding the band's sound and giving the songs a dreamier atmosphere. There has always been a darkness to the Prids' sound, but heavier use of Mistina's vocals has added a sparkle in the darkness. The arrangements are lush and grand, and there is an ethereal quality to the tracks that the band has never captured before. Evolution.

"When I Look" is an immediately gripping dream pop song, featuring tumbling guitar and soaring keyboards that perfectly capture both elements of sadness and hope, a feat the Prids do very well. "Waste Our Time" is almost anthemic in sound, with a victorious rock solid melody and strong vocal harmonies that find Mistina sounding not unlike Siouxsie Sioux next to Frederickson's own unique and skillful vocals.

Tracks like "Fragile" truly hallmark the band's expansion of sound, featuring a serene pop atmosphere and a dreamily delivered chorus of "Drowning in your ocean eyes..." that precisely encapsulates the feeling of slowly sinking into something lovely, then brings you back up with upbeat guitar pop, only to drown you again. A beautiful feat for any song. Doug Martsch of Built to Spill does guest vocal harmonies and guitar on "In The Fall", a stellar track with an achingly haunting melody and chorus. The synth arrangements alone on this track are awe-inspiring and beyond gorgeous. The album's closer, "Tonight October", has all of the sweetness of the perfect lullabye, and is the ideal ending for this record. Triumphant, indeed.

Chronosynclastic is a superb effort on the part of the Prids, demonstrating a new scope of sound that adds a ethereal sparkle to their lush darkness. It is a gorgeous melding of genres, showing a band at the very top of their game, and I couldn't recommend it more highly. When The Sun Hits will feature an interview with the lovely Mistina La Fave in the very near future, so look forward to that, and check out the ace track "Desolate" from Chronosynclastic, linked below.

Posted by When The Sun Hits - All things shoegaze. at 2:01 PM