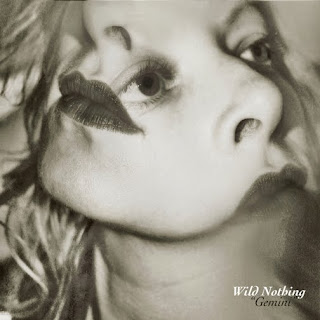 Such a nostalgia-soaked album could only be the product of an old soul, regardless of Jack's true age. Gemini is an incredible dream pop effort, overflowing with nostalgia, loneliness, regret, and a pre-occupation with death that isn't off-putting, but rather, strangely charming. There is an unexpectedness to the lyrics that makes them seem incredibly vital and honest. Someone had this kid listening to the Cure at a very young age, surely; I hear the influence all over the record. When it comes to elements of an album, this foundation is obviously exceptional. But anyone can listen to the Cure and attempt to make a record like this. Many try. Few succeed, and fewer still succeed with such a degree of authenticity.

I was sold within a few seconds of the first track, "Live in Dreams." I've listened to a ridiculous amount of music in my time, but an album that opens with a stunner like "I could ask you, 'Are you dead like me?'" has my immediate attention. The startling frankness just guts me. A chorus of: "Because our lips won't last forever, and that's exactly why I'd rather live in dreams and I'd rather die," with a synth line that's almost devastating, is basically all I want from a song, ever. Again, it's so easy to want to pull this off; it's a very different thing to execute it in such a way that one is transported to a gloomy day in England in 1985. Never mind that Tatum hails from Virginia, and may or may not even have been born by 1985.

In many ways, Gemini is a love letter to record labels like 4AD, Slumberland, and Clairecords; it's steeped in the early sounds of the classic dream pop bands on these labels. To say this is a lo-fi affair is putting it mildly; it's practically a monument to bedroom pop. The sonic simplicity of "Pessimist" has all of the air of a one-man bedroom orchestra, once again recalling the Cure with the lyrical reference straightaway of "Boys don't cry, they just want to die, " and is probably the most powerful 1:47 of songcraft I've heard in a long while. Bleak as the lyrics sometimes can be, they are deceptive, in that there is still some sort of joy in even the darkest moments. It's almost a celebration of accepting the darkness in life. There is power and beauty in that.

The variety of sounds on the album is also astonishing. The songs go seamlessly from slow keyboards and acoustic guitar to nostalgic electronic pop. "Confirmation" features the best synth-driven falsetto I've heard since, well, the 1980's, then slips right into an obvious Mary Chain reference in the opening moments of "My Angel Lonely." The title track, "Gemini," features what I can only conclude as a lost guitar riff the Cure never wrote, but should have.

I could easily go through every track, extolling virtue after virtue, citing parallels everywhere, but the rest is up to you. To quote the title track, "Do I really need to tell you?"

Gemini is simply stunning, an absolute must-own for any lover of classic dream pop. I expect big things from this lad.