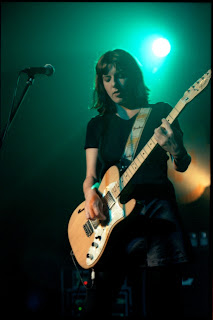 We recently had the good fortune of interviewing the always lovely Emma Anderson, of Lush and Sing-Sing fame, for When The Sun Hits. Being long-time Lush fans, we were both ecstatic to have Emma grace our blog. She astounded us with her humbleness, seeming not to know just how much Lush was and is still today a very much beloved band! Lush was an extremely important cog in the machine of shoegaze, and an amazingly talented band that still has an extraordinary number of followers! We wish Emma all the best, and want to thank her again for her time. Please enjoy finding out a little bit about what Emma has been up to recently in the interview below!

Lush formed in 1988 when Miki Berenyi and I, who had met at school aged 14, formed a band with Chris Acland, Meriel Barham and Steve Rippon (whom Miki had met at North London Polytechnic). Previous to that Emma and Miki had both been in other bands (Emma in The Rover Girls and Miki in The Bugs) and had messed around in Emma’s kitchen under the name "The Baby Machines".

2. At the time of Lush did you feel like you guys were a part of the "shoegaze" scene, or any scene?

I guess we did – "The Scene That Celebrates Itself" and then the shoegaze thing and latterly Britpop. These "scenes" are always press invented though. Having said that, we did know a lot of those people quite well. It was harmless enough.

I am afraid I haven’t done any music for about 5 years which when the last Sing-Sing album came out. Day jobs and now a baby have scuppered that! I’d love to do something in the future when I have more time but when that might be, who knows!

4. What sort of set up/gear do/did you use? What is/was the most important piece of gear for your sound (i.e. pedals,guitars etc.)?

My main guitar was a Telecaster Thinline though I did use a Stratocaster and a Jazzmaster too. Effects-wise I started off with Boss foot-pedals and had overdrive, chorus, flanger, delay and equaliser but then I moved onto a rack unit called a GP16 which became the bane of my life (it kept breaking down – sometimes in the middle of the set). When I was in Sing-Sing I went back to Boss pedals...much easier!

5. What shoegaze/dream pop bands/artists (if any) have most influenced your work?

I did love The Cocteau Twins even before I met them and I knew My Bloody Valentine pretty well though when I first knew them they were a ‘60s garage band with a male singer called Dave Conway! The House of Love were a big influence at the time, if they count. Other than that, I have many other influences apart from those types of bands – I loved Husker Du and Blondie!

I am really out of touch with new stuff! My main consumption at the moment is TV. Is that bad? I love Wallender, the Swedish crime drama, and I am getting into Mad Men very late.

7. Can we expect to see a Lush release and/or reunion in the future?

Probably not live work but there has been talk of a compilation though the "talk" has been going on for some time now!

8. Do you think modern bands realize how important Lush were to the development of shoegaze and dream pop?

I don’t know. People were always embarrassed to say they liked Lush – we were never ‘cool’. I suspect we had our fans though – though they never let on.

9. What is your philosophy on life, if any, that you live by?

"If you don’t ask you never get" has always been a motto of mine.