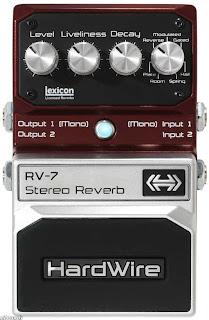 re·verb (r-vûrb) Informal noun.
1. A reverberative effect produced in recorded music by electronic means.
2. A device used for producing this effect.
re·verbed, re·verb·ing, re·verbs
To reverberate or cause to reverberate.

Reverb (short for reverberation) is the acoustic environment that surrounds a sound. Natural reverb exists everywhere. Whether the space being described is a bathroom or a gymnasium, the essential characteristics remain the same. Basically it is an echo, a reflection. To me reverb is essential in almost everything I play, even if it's not necessary (it is to me), I still pile it on! There is something about the singing, dreamy quality of "verb" that I adore. It is a must-have effect for most shoegaze/dream pop guitar players, as well as Surf and plain old Rock and Roll. Just listen to the Reverb laden beauty of Slowdive, the echo-drenched dreamscapes of the Cocteau Twins, or the "King" of shoegaze, Mr. Kevin Shields (My Bloody Valentine). Kevin has made using Reverse Reverb (which is offered on this pedal!) an art form unto itself and created a whole genre (shoegaze)in his wake! My point is this: reverb is an essential effect and shoegaze/dream pop could not have existed without it. With that being said, I will get to to the review.

The Hardwire RV7 by Digitech is a true by-pass, all digital, stereo effects pedal. It comes in a metal housing (as do all in the Hardwire line) and has a Blue LED indicator light (which looks awesome!). It has a brushed steel appearance, metal knobs and is as aesthetically pleasing as it gets. It is slightly larger than a standard BOSS pedal, but with a little ingenuity it can be added to any pedal board. It comes with a standard 9 volt power supply, velcro pedal board pad, glow in the dark sticker (so you can find it in the dark) and the StompLock (very cool!). The StompLock is essentially a piece of rubber that goes over the knobs so they cannot be bumped during play. This doesn't seem to happen too often for myself but it does happen, and the StompLock can alleviate this problem. Here is what the pedal offers effects wise:

It has a Tails On/Off Switch (located underneath the foot switch) – when on, Reverb tails are not cut off in bypass! The tails feature is a massive improvement over older pedals of this type. What this means is when you turn the pedal off, if the Tails Switch is on, it will slowly decay. If Tails switch is off it will cut the effect abruptly and stop it "dead". All of the "verbs" on the RV7 are clean and natural. I use every one of them at specific times, for specific songs and they all sound lush and clean. For the money the RV7 performs as well as any rack mount I have ever used and is so, so easy. There is nothing to program (for me that's a plus) and can be manipulated by one of four knobs:

Overall one of the easiest to use pedals I have ever owned.

Now, let me describe the sound of some of the different "verbs". First and foremost, the Reverse Reverb effect. This effect is instantly recognizable as the MBV sound and this pedal does it pretty well! Kevin Shields uses a rack mount Yamaha SPX90 and Yamaha GEP 50 to achieve most of his Reverse Reverb effects. I have owned a Yamaha GEP 50 and it has some amazing programmable effects in it, but for the money this pedal is the way to go. The only other pedal I would consider using is the Yamaha Magic Stomp (which is no longer in production) for a proper Shoegaze type sound. Honestly, I find myself using the Gated Reverb more than the Reverse Reverb. The Reverse has a slight delay in sound that can be confusing on the fly. It quietly crescendos to full volume and can feel almost behind the beat. It definitely takes practice! I suggest playing around with different combinations before using it in a live context (of course!).

The Gated effect is my personal favorite for achieving a gazey sound. It has an abrupt decay that works very, very well. I also really like the Modulated "verb". It is a very subtle effect. It quietly adds a lush chorusing effect on the tail end of the Reverb. It is just beautiful for chordal work (very Cocteau Twins!).

The Hall Reverb is as big as a mountain range and will last almost as long. This is the Slowdive/Daysleepers/Brian Eno type sound! It is very warm and super, super deep. Any ambient guitarist would love it.

The last "verb" is the Spring Reverb and it actually sounds like an old spring box in the bottom of a Vox or Fender! You can get as surfalicious as you want with this thing. It is straight up Ventures/Dick Dale style Reverb. Can you say Jesus and Mary Chain anyone?

Digitech nailed it with the RV7! All of the different Reverb effects do exactly what they say and with a little creativity they can do much, much more. It is a sturdy and easy to use Reverb effects unit for 150 dollars! What more could you ask for? This little box is now an essential part of my rig. I have been using it for about 9 months and have zero complaints. If you need lush, gazey Reverb ,this is the way to go for the money. It's like having several pedals galore (wink,wink!) in one pedal. 5 out of 5 stars!

Posted by When The Sun Hits - All things shoegaze. at 9:08 AM