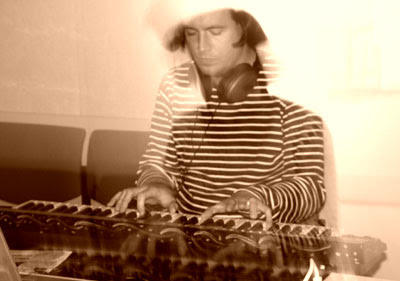 We had the recent honor of interviewing the esteemed Ulrich Schnauss for When The Sun Hits. His body of work has been vastly influential to the current state of shoegaze and dream pop, but his notoriety and sound reach far beyond only this genre. Deeply rooted in electronica, ambient, drum and bass, and IDM, Ulrich is an elegant electronic composer of unparalleled talent, creating highly lauded albums such as A Strangely Isolated Place and Goodbye. He is equally well known for his work with other musicians, remixes, and various other stellar contributions to the music world. We consider Mr. Schnauss to be an artist of incomparable caliber, and are truly thrilled to have him appear on When The Sun Hits.

We've just finished the new Engineers album (to be released in October) - besides that I've been concentrating on my next solo album.

Other recent projects include:

- a soundtrack with Mark Peters (Engineers)
- collaboration of songs with All in the Golden Afternoon as well as A
Shoreline Dream (some of these will appear on an upcoming "Rocketgirl" compilation)
- a collaboration album with Kirsty Hawkshaw - been working on this for a while - just a few songs missing now...
- a few more one-off collaboration projects that I can't announce yet...

For creating the basic sounds I use a range of synthesizers (vintage and current) and effects units - once these core sounds are recorded into the computer I do some additional treatment using various plug-ins (a lot of granular stuff usually).

My all time favourite instrument is the Octave Plateau Voyetra 8; my favourite effect would be the Publison DHM 89 B2.

3. What shoegaze bands/artists(or whoever) have most influenced your work?

Two particular songwriters come to my mind: Andrew Sherriff and Emma Anderson. Both have a really unique way of writing chords - elegantly alternating between major and minor harmonies in a phrase. Sonically my favourite shoegaze record is Slowdive's Souvlaki - in my opinion one of the best produced contemporary albums in general. A
beautifully warm, harmonically rich sounding record that makes generous use of modulation (flanging) and reverb/delay effects - perfect!

4. Tell us a little about what you are currently into (bands, books,
films, etc)?


My favourite director is Michael Haneke - "The White Ribbon" is probably the best movie I've seen in a long time. I don't have enough time to read - if I do manage to check out some stuff it's usually non-fiction. The last book I read was Goetz Aly's
Unser Kampf - a (from a left wing point of view) painful but necessary critique on totalitarian and antisemitic tendencies in the contemporary German protest movement.

As far as music goes I listen to a fairly wide range of stuff - right at the moment I'm enjoying some 80s reissues (Japan, Propaganda), early 90s dance and electronica, Norwegian bands such as Serena Maneesh or Motorpsycho, electronic composers such as Bernard Parmegiani - the list is endless...

5. Can we expect to see you on the road in the near future (other than the current tour with Chapterhouse)?

Yes, definitely around the time the next album comes out - there's no actual date yet but it shouldn't be too long from now.

6. Do you consider what you are doing to fall within the genre of "shoegaze"?

It's certainly very strongly influenced by the first generation shoegaze bands - part of the music that I grew up with. At the same time there's other influences which are just as present (90s electronica) or even more important (Tangerine Dream). Generally i'm ok with using the "shoegaze" tag cause it gives people a realistic idea on what to expect but I'm hoping that I'm not limited to a too narrow sound.

7. What do you think of modern "shoegaze/dream pop" artists, any favourites?

I generally find the American stuff the most interesting as those bands seem to use "shoegaze" elements as one thing among others to create something new rather than trying to sound exactly like a band would have did in 1991. I find the current hype around all things shoegaze even a bit irritating in a way - reminds me a bit of what
happened to dance music in the 90s. Rather than a situation in which the people who have worked hard on reinventing this sound even when no one else was interested finally get some recognition we seem to be witnessing a scenario where a lot of insubstantial trendy types (the Horrors etc.) cash in on other people's efforts - just the way it usually goes I guess...

I consider myself to be a Marxist - one of the most important aspects of this is for me to recognize that the problems we face trying to organize human life (which is what the word "society" usually describes) are not caused by the individual "evilness" of specific people or groups. Corporations, hedge funds or even record companies are not to be critized from a "moral" perspective - they just function exactly the way they should according to the capitalist logic. So the problem is that we're dealing with an abstract "enemy" or opponent (the political or social "system" if you want to say so).

I'm saying this as I find the current political landscape quite frustrating - usually we're just given the choice between two foul options: those who are well off fight to protect the capitalist status quo including all its classist injustices - on the other side there's a deeply reactionary protest movement that flirts with religious fundamentalism, antisemitism and anti-western resentments. I still hope that people will one day understand that things can only change if we fight for a different objective foundation (no private ownership of the means of production) of how we organize society as this will always determine the consciousness even of the very individual - hopefully bringing us a step closer to an "association of the free" rather than destroying even the insufficient freedoms we have in this world.

Posted by When The Sun Hits - All things shoegaze. at 2:08 PM