Occasionally, When The Sun Hits will be featuring guest writers for the blog. Mostly because our growth since July (when we were born) has been so rapid that Danny and I can hardly keep up with all of the amazing albums that are being released; or I should say, we can keep up with them, but between the two of us, we certainly can't review everything! In 2011, When The Sun Hits will be expanding on many levels - merchandise, for one, and other surprises that will come to light soon enough.

This particular guest writer is a certain Josh Davis, who hails from Milwaukee. I've known him for several years; in fact, he was a co-writer with me on my very first online music journalism endeavor back in 2006-2007 (sadly now defunct). Not only does he have excellent taste, but he's also a musician and an eloquent, concise writer. And because he lives so close to Chicago, he has access to underground goings-on that Danny and I just don't have. The review is of the Chicago based drone/noise quartet Implodes, who releases cassettes only on Chicago's cassette only record label, Plustapes.

I find this interesting for several reasons: as digital downloads and mp3s are slowly taking over the music industry, CDs are, in my opinion, becoming rather obsolete. On the flipside, so-called "obsolete" formats such as vinyl and cassette releases are gaining popularity, especially among die-hard collectors. There are many cassette only labels out there (check the right sidebar on the Plustapes website for a list of those), and the music industry is experiencing a drastic change in the way things are done. The next few years will certainly be interesting, in that regard. One thing is for sure, and I'm quoting Plustapes here: "Tapes will never die." Nor will vinyl. This is becoming increasingly obvious. 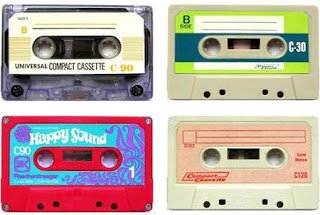 Enjoy the review of the Implodes cassette release by Josh Davis, and definitely look into the cassette tape-only labels. At the very least, I think you'll be surprised at how many they are! The evolution of music is always changing...and that's part of the fun! 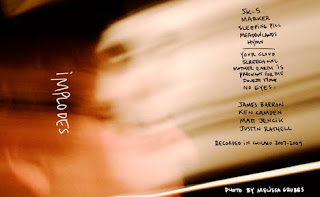 About a year or so ago, I was in Chicago, visiting friends and buying records. A trip to Reckless Records was on the docket for the day, so I checked their website in the morning to see if there were any interesting new releases. Sure enough, one of the listings was regarding a cassette-only release by a band called Implodes. I don't remember exactly what it said, but the name-checks of The Jesus and Mary Chain and Flying Saucer Attack were all it took to sell me. I was not disappointed. 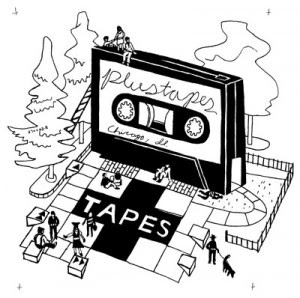 Implodes' self-titled cassette was a brand new release right then, in October of 2009, the twenty-second on Chicago's Plustapes label. There's been much talk, and will be more, about the current wave of tape-only labels. Are they merely capitalizing on retro nostalgia? Or on the cheap cost of duplication? Perhaps some are doing the former; certainly not the latter, as tapes and CDs are pretty similar when it comes to production costs. But some albums, and much of the Plustapes roster, have a through-line of logic when it comes to cassettes. Plustapes is very eclectic in its releases, from 60's Indonesian girl group Dara Puspita to modern garage bands like Mannequin Men or Blasted Diplomats. But they all carry the same cassette logic, one way or another: this stuff isn't glossy. It lives in basements, cheap studios and four-tracks, and it may as well stay there when it arrives with the listener. 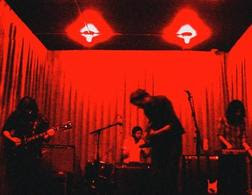 Implodes' tape specifically reminds me of those basements. Not very well-lit, maybe a little funky smelling, and a bit sinister. The Flying Saucer Attack comparison strikes me as apropos, in a photo-negative sense: this is the darkness to their light. Everything's distant and shrouded, though the drums sometimes cut through. On a track like "Meadowlands," the vocals drift, and don't get too excited. Rather, like someone quietly threatening to hurt you, they're effective and punctuating in their calmness. Like the distended Misfits logo photograph on the cover, the image might be blurred, but that's still a fucking skull.

There's been a long period of silence following that tape. Guitarist Ken Camden put out a solo record on Kranky and played with a bunch of other people, and there was a bass player switch. But there have been pictures of mixing and mastering sessions, and an announcement that the album is "in the can" (along with a somewhat enigmatic blog post featuring only the Kranky logo - presumably meaning the album will be on that label.) Video evidence of the current lineup shows the band leaning towards a clearer, more forceful sound...but not by much. Keep your eyes peeled, folks, I think this one's going to be worth the wait.