The Reid brothers are almost as famous for their brotherly contention as they are for their music with The Jesus and Mary Chain. Sibling rivalry is normal - the infamous Reid brother antics are not quite. Fighting on stage, fighting while recording, fighting during interviews, physical brawls, not speaking to one another for years...yes, it's unfortunate, but it's also pretty hilarious. The following is a quote from William Reid about his cats - kind of.
(Thanks to the lovely Rorika Loring of the Fleeting Joys for passing along this quote!) 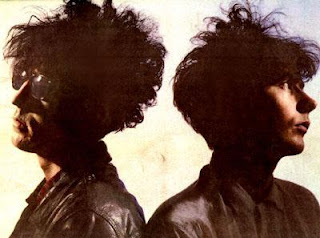 "I’ve got two cats - they’re called William and Jim. Jim’s a moaning little bastard and William is the nice one. I chose the name after I’d had them a couple of days so I could work out what names would be appropriate… so that I could work out which was the cutest. William is easily approachable and Jim keeps his distance. He’s very, very unfriendly and he’s incredibly timid. I love to torment him the way I used to torment Jim when he was a kid. Jim makes a brilliant noise, squealing. I’m thinking of making a tape loop of it."
– William Reid, August 28, 1987 (via thejesusandmarychain)
Posted by When The Sun Hits - All things shoegaze. at 12:52 PM