Interview: Me You Us Them. 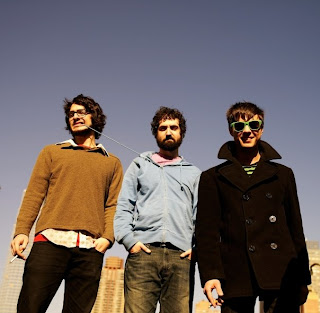 Me You Us Them is the Brooklyn based trio of Ryan Reesey on guitar/vocals, Ian Ljungquist on bass/vocals, and Zach Eichenhorn on drums. Their sound is amazing but difficult to describe; honestly, the description on their LastFm page - "an anthemic wall-of-sound blitzkrieg" - is basically as on target as you can get with English words. Their 2010 debut LP, Post-Data (which made our list as one of the best LPs of the year), instantly electrified listeners everywhere, and with good reason. It basically kicks ass. An upcoming 7 inch split with When The Sun Hits favorites, Bloody Knives, is soon to be released (read Amber's review of it here), and from where we sit, Me You Us Them are bound for continued greatness. We loved doing this interview - these guys are entertaining, to say the least! We hope you enjoy the interview as much as we did. 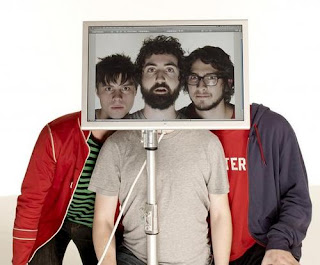 Ian: Ryan and I knew each other from both growing up in Maryland. Over the years, our paths crossed unexpectedly, the last time being here in Brooklyn. He was looking for a drummer, and I had just quit my band. People came and went, I moved over to bass, we changed our name, got our good friend Zach to play drums, and here we are.

2. Where does the name "Me You Us Them" come from?

Ryan: We named ourselves after the only song we had at the time.

Ian: And it's also who we write songs about.

Ryan: I've been working on growing my hair out. It's at that awkward length right now.

Ian: We're writing new songs about it. He looks pretty Biebed out right now. We're also about to release a split 7" with some gents from Texas called Bloody Knives. Perhaps a spring tour. 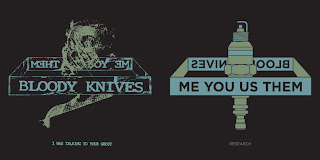 4. Can you talk a little about some of the special packaging for Post-Data, for those that aren't aware how awesome it is?

Ian: I refuse to address those who aren't aware of us. 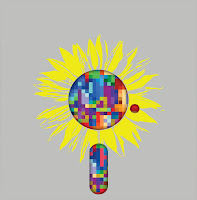 5. Do you consider Me You Us Them's music to be part of the current shoegaze/dream scene, or any scene?

Ryan: I never really considered us a part of that scene until people started grouping us in with those types of bands. I guess I can see how an outside perspective might think we're a bit gazey.

Ian: I think there are some very "gazey" and dreamy moments on the record, and I wouldn't hold it against anybody for using those classifications to help describe us to their friends. But I think there are also some influences in there that pull us away from completely fitting into that category. But call us whatever you want. 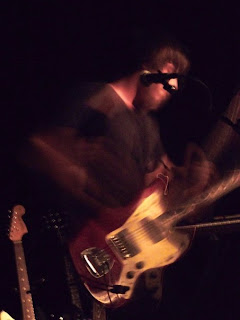 Ryan: Lately I've been listening to A Place To Bury Strangers and Hooray for Earth a lot. We can squeeze them in there, right?

Ian: After rehearsal, the last thing I want to hear is a Fender Jaguar and oodles of reverb. 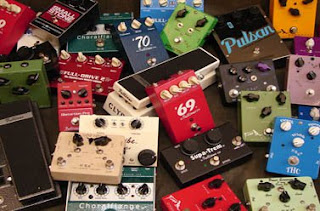 Ian: Haha. He actually uses his Jazzmaster more often. I sound like I'm covering for him.

Ryan: I use whatever I can afford. It's all important, but we rely pretty heavily on our various pedals.

Ian: That's what we're staring at, people. Not our shoes.

Ian: My musical quilt: stitched together patches of South of Heaven, Surfer Rosa, Violator, Gone Glimmering, Emergency and I, and The Immaculate Collection. 1000 thread count.

Ryan: Nice. I'm going to go an all cotton blend of Sister, Hissing Prigs in Static Couture, Celebrate the New Dark Age, Dots and Loops, Over the Edge, and Songs from the Big Chair. 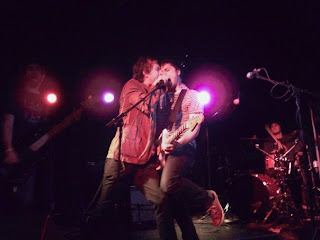 10. If you had to choose one Me You Us Them track that was the ultimate definition of your sound, which would it be and why?

Ryan: From the album? Maybe "As of Now"? It covers a lot of landscape, so you may get an idea of who we are.

11. How do your write your songs? Collectively or individually?

Ryan: Honestly, it's different every time, but me and Ian scrapping over a chord change or song structure is pretty standard practice.

Ian: While Zach just laughs and makes fun of us from the corner. We are probably most productive when we record as we write. That way no one forgets what they were doing last time, and it allows us to revisit, edit, and build ideas between sessions. 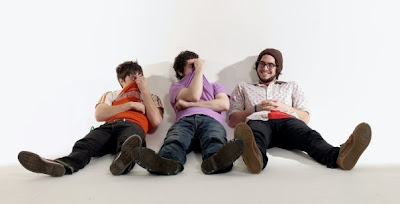 12. What is the most exciting thing that happened for Me You Us Them in 2010?

Ian: We released our 2009 debut. It was a little overdue.

Ryan: Haha. We also had the pleasure of getting to meet and play with some pretty fantastic bands, and made a lot of new friends in unexpected places.

Ryan: Are we there yet? It's my mission question.

Ian: "If time has taught me anything
Got to learn to be the ball
And I can’t keep from laughing at it all (whoa)
I’m gonna laugh" - Kenny Loggins