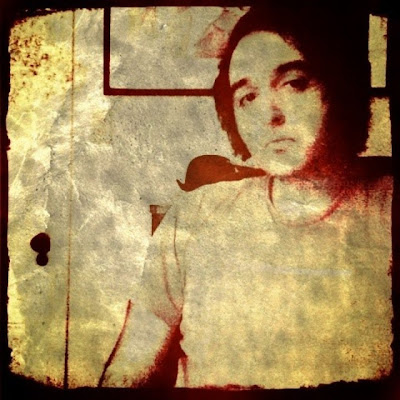 The Winter Lights is the one man dream pop act by Luis Leal. Though Luis has been a lifelong musician, The Winter Lights project began in 2007, and the band's first proper release, the gorgeous Modern Love EP, has just been released (read Amber's review of it here). The EP is an incredible piece of baroque bedroom pop, and produced by the highly lauded Eric Matthews, whom Luis often works closely with. When The Sun Hits is proud to feature this interview with Luis Leal, who we not only consider a very talented musician with a bright future ahead, but also a good friend and charming person. Enjoy!

1. When did you form The Winter Lights?

I started The Winter Lights as an outlet for the songs I started writing in 2007. I felt like the songs deserved more respect than my name, and I thought they had a particular topic that the name made sense with. The name came from an Ingmar Bergman film called Winter Light, which bears similar topics to my songs, I think. 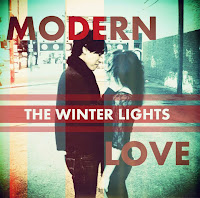 Well, now that the Modern Love EP is done, I'm shopping it around for a label. I've been playing some low key local shows, and some college radio, which so far, has been received wonderfully. It's been amazing re-translating all of these songs into something I can perform with a single guitar and a harmonica. I've been writing new songs for another release, and I'm hoping to have that done by the spring of 2011...which I think is going to be exciting. I'm also helping out with Cardinal (Eric Matthews and Richard Davies) reunion record. I've been helping Richard record his parts for the record, and then sending them to Eric for him to put his parts in. It's been amazing being a part of this project; through the ups and downs, these guys are heroes of mine.

3. Do you consider your music to be part of the current dream pop scene, or any scene? The Winter Lights has a very dreamy sound, but do you identify with that genre at all? (When I played a track from the new EP on my shoegaze/dream pop radio show a couple of weeks ago, it truly sounded like it belonged in the mix.)

I love dream pop, I'd like to get that out of the way right now. Whether or not this music bares resemblance to the genre, I don't know. I have always felt like that's more in the eye of the beholder... I don't know. I'm a pretty sleepy guy; I think it could fit into that scene. That was always the nice thing about dream pop - the influences come from all over the place, and every band in the genre is totally different. I think I could be accepted into the fold.

The Winter Lights. The Carousel.
4. What do you think of modern dream pop artists, any favorites?

Well, modern dream pop can be tricky to define. The National? Beach House? Surfer Blood? The Pains of Being Pure at Heart? Deerhunter? Are these bands part of that genre? (When The Sun Hits interrupts to say: yes, we think so!) I'd like to think so; I love those bands. I usually pay a good amount of attention to the Beggars Group releases, which certainly is not the be all end all of the genre, but there are some amazing bands there as well. 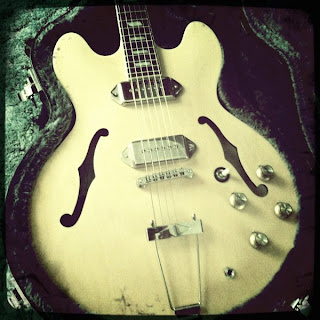 This is a very very tricky question. I have some pretty great stuff that all is very important to the sound of these recordings, but I'll give it a shot. I think first and foremost my voice has a big influence on the songs. I don't have much of a range; I have low and lower, and that's it. Also, it's weird and warbly and I can't control it.

Secondly, I have this amazing Teisco Del Ray electric tulip guitar... it was a gift from a friend for mixing his record. I high strung that guitar and it's beautiful and bright. The pickups are strange and they look like harmonicas, but they sound amazing. Next, I'd say the Mellotron. I have a bunch of software replicas of the Mellotron (If you can afford one, I don't 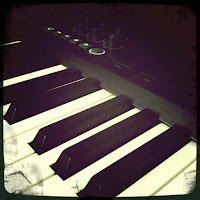 like you. Wait...I take that back...let's be friends. Can I borrow it?) From Reason, to Gforce to IK Multimedia, I'm a Mellotron software aficionado. Lastly, my Mac. My computer is like my tape machine... none of these songs would exist without it. Otherwise, I'd have to compromise something or other on analog tape that I don't have to in Logic or Pro Tools.

6. Tell us about your working relationship with the highly celebrated musician Eric Matthews? 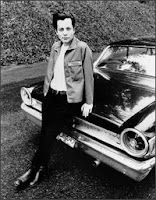 Eric and I started working on these songs a while ago. I sought him out and started emailing him because I've been a fan since high school. I thought that what he had to offer would greatly improve these songs. We send things back and forth via email and it's always interesting. I consider Eric part of The Winter Lights (whether he likes it or not). Seriously though, the songs got better when I met Eric. I started writing more of what I felt and less of what was "cool", and I think the honesty that comes from the working relationship with him is what makes these songs so captivating.

Sheesh... okay. I'm going to take a stab at this. Chris Bell, Galaxie 500, the Beatles (duh), Harry Nilsson, Kevin Shields, Ride (the band in total...I can't isolate them individually), and the Kinks. I'm going to stop there, because there are so many more. I consider this a perpetual to be continued. 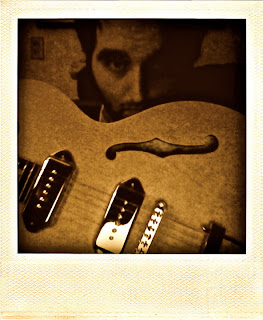 Lately I've been really enjoying Tristan Egolf. I just finished reading The Skirt and the Fiddle, which was a really great short read. Lord of the Barnyard is my favorite, though. I've been listening to The Ghost of a Saber Tooth Tiger (acoustic sessions) a lot lately. That's Sean Lennon and Kemp Muhl. I love that record, regardless of what anyone says. I think there's some beauty and honesty in that record. I like how the kind of bordering on pretentious words kind of lead to some really honest statements in the songs.

9. How do your write your songs? Do you come up with a melody first and then set lyrics to it, or vice versa (or another way altogether)?

I usually write everything all together. It's kind of a jumble of things in my mind. I never write the same way twice. I guess the only real method I have is to just stop everything I'm doing when the idea hits me. Because it does just hit you...like, over the head. I usually find myself stopping and filtering out stuff as the moment hits...saving stuff for later. It's kind of like writing a book. I can't answer this question. 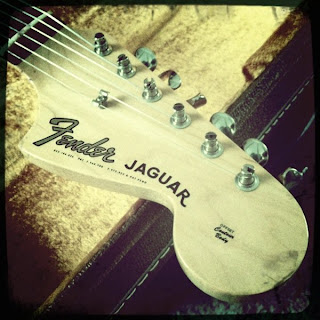 10. What is the most exciting thing that has happened for the Winter Lights in 2010?

I finished the release. The continuing story of Cardinal. Gathering up the courage to play these songs alone. I think the most exciting thing are the new songs that are coming. I'm the kind of person where I need to finish something before I can move on, so now that the Modern Love EP is finished, I can finally open myself up to write things. I've been communicating with some excellent musicians (I don't want to name any names yet because, as always, things can fall through).

No, seriously... I just try to be honest and kind. Maybe that means I'll be taken advantage of, but I have this naive idea that if I'm a good person, people will be good to me. If the music is good, people will recognize and appreciate it. That's all I can really do. Try to keep the id, the ego and the superego in check.

All photos in this article (except the one of Eric Matthews) were taken by Luis Leal.

Posted by When The Sun Hits - All things shoegaze. at 6:45 PM