As we noted in the previous post, our introductory love fests for each participant are going to have to be more brief, due to so much content left to post! Still, I think you'll get our sentiment. So: Ana Breton. She is a member of the highly lauded Dead Leaf Echo and in the past she was a long time integral contributor to another blog band fave, Mahogany. She is beautiful (mythological goddesses, eat your hearts out), talented in a number of ways (musically is one, clearly), and a genuine human being. We can just tell. She is. She's special, and we love her for it. Thank you, Ana. Never let your light dim. 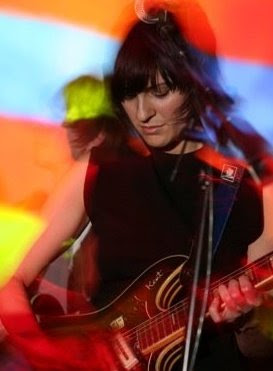 I love that Amber asked me to do this because my friends used to do a top 20 songs of the month mix-tape swap. Then, at the end of a year we would put together a top 20 songs of the year. I always wanted to regroup and do a top bands of all time roundtable where the justification for your choices would be as much the musical integrity as the life experience of it. That is how I came at my list. I also am going to exclude the bands I have played in because they have definitely been the most influential and profound in my life, but I'll just let that speak for itself.
******
1. Adorable - Sunshine Smile
The early 90s really were the Summer of Love for me. It was a magical time when I was discovering shoegaze music and was young enough not to realize that it wouldn't "always be this way", what with Ride, Swervedriver, Verve, Chapterhouse, Catherine Wheel, Lush putting out epic music all at once. Adding to the magic, I was also falling in love for the first time with someone who I would form my first band with, who made me mixtapes almost every month, and who took me to all the indie shows in DC. We did a college radio show together and bonded for life with the guy who had the show after, who also loved Adorable and who legendarily later fought off a crowd of fans for a piece of Piotr's white guitar when he smashed it at their last NY show.

My first band was formed around a group of friends who all loved Adorable.
I saw them twice, in DC and Baltimore and we became pen pals with Robert who later sent us the b-sides and rarities which we played on one of our last radio shows.

Sunshine Smile epitomized the magic and bliss of falling in love with music and beauty. Adorable is one of my top bands of all time and this song is definitely one of my top songs of all time. Like all great art, it still gets better with every listen.

"Heaven Sent An Angel" feels like a gift that I get to keep forever. It's the ultimate love song.

Revolver toured with the Drop Nineteens in '92 and I missed that show by a few weeks because I found out about them just after. I love both albums by Revolver.


I think this song could easily fall on one of those "more academic" discussions Danny mentioned in terms of all time greatest songs. I also love that this is posted with the video because that is how I remember first experiencing the song - by watching the video during a very blissed out night. I was just in awe of it. The song consumed me and the band and the lighting look so cool. I was watching in a dark room and the light from the TV filled up the room and we danced along to it. It was like being absorbed into the song. I love the chant to just "let it go". Unforgettable.


Ok - The WHOLE album Love 15 is amazing and dreamy and was the soundtrack to my life for a long while. Picking one song is so hard but "Uma" was always the standout single to dance around in circles to. It's so triumphant! The guitars are so rich and lush, the beats are really smooth and David's wistful and quietly obsessive lyrics about beautiful girls are enchanting. Saw them live in Baltimore and they came and hung out at an indie-dance party we threw in DC the next night. In an amazing coincidence of good fortune, I would find myself in a band years later with their drummer Odell Nails. Dream come true.

So VG went more indie rock / pop in their later albums, but their early singles are straight on "I can't make out all the lyrics walls of noise fuzz." There is a lot of focus on the british shoegaze bands, but let's not forget Lorelei, The Ropers, and The Swirlies, all who could of made this list. Velocity Girl were one of my DC local heroes. I was completely obsessed with the band, especially Sarah Shannon, who is still one of the best front women I have ever seen. She never stopped moving and could sing beautifully high, loud and clear live. I saw her in the mall once and was so excited and nervous to say hello I treated her like an untouchable celebrity - she just thought I was someone she knew from school. I sang along with all the songs, hoping I could sound as sweet. I love the jangle noise of the guitars which was so new to me. "This is what they mean when they say 'fuzzy' guitars!" The boys in the band were also great performers, Kelly always making jokes on stage, Archie's jangle noise. I thought it was ace when The Pains of Being Pure At Heart asked him to mix their record.
Posted by When The Sun Hits - All things shoegaze. at 4:50 PM