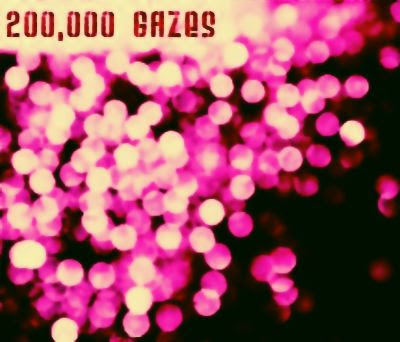 Update: Due to an unprecedented number of submissions (over 200! Seriously!), When The Sun Hits is still compiling the double volume 200,000 Gazes compilation. We are all working hard, and we are FOR SURE (we swear) releasing it on January 1, 2012. 200,000 Gazes will be the first rad release of 2012! We are looking forward to starting out the new year with such an awesome offering. Thanks to all the bands who submitted - your collective talents have made choosing the bands for the compilation difficult indeed!
Read below for more info.
When The Sun Hits is now closing in on 200,000 blog views! If you were around for the first 100,000, you know that we had a big celebration with fun events and posts, as well as created an exclusive compilation of donated tracks, which had a VERY large circulation.

For the past several months, we have been taking submissions from bands for the release of our next compilation, 200,000 Gazes.
The compilation was meant to be released on November 19th, celebrating it's release with a party during the XD Festival in Chicago that night.

We cannot take any more submissions, so please don't ask. We apologize, but we have already received close to 200 submissions (whoa!), so we want to be fair. The upside to postponing the release of 200,00 Gazes is now we can do what we had originally wanted to do - release 200,000 Gazes: Vol. 1 & Vol. 2. That's right, TWO full albums of some of the best shoegaze and dream pop being made on the planet, hands down. Both volumes will be released on Tuesday, December 10th, 2011 as free downloads on bandcamp. We will also be re-issuing our previous compilation, The First 100,000, on bandcamp on that same day. We have some surprises in store, so stay tuned!!

Have any questions? Email whenthesunhitsblog@gmail.com with a title of "ATTN AMBER: compilation questions" and I will answer them. Don't message me, Danny, Rob, or WTSH via FB about this.
Posted by When The Sun Hits - All things shoegaze. at 11:00 AM