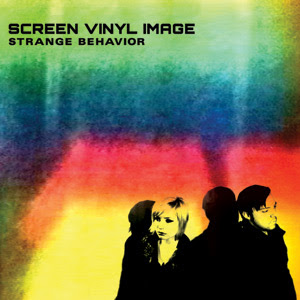 Screen Vinyl Image, Kim and Jake Ried, a husband wife duo from Arlington, formed in 2007 from what was Alcian Blue. Since then, they have been a very industrious pair. Three LPs -- Interceptors (2009), Ice Station (2010) and now Strange Behavior (2011) along with a variety of split seven inches and EPs have kept them busy.

From the start, SVI set out on an expedition into the darker side of shoegaze. Or maybe they brought shoegaze to the Hacienda with Ian Curtis spastically twitching on a stage that turns out to be a club floor on industrial goth night. Whichever route they took, they ended up with a racing, haunting, echoing, reverb-drenched sound that is felt throughout their catalogue. Played at the right volume (loud, very loud) the sonic riot can put an already predisposed mind into an altered state. This is a very good thing (if you like altered states).

SVI. Station 4.
Strange Behavior is somewhat of a departure for SVI. While Jake’s vocals are still heavily drenched in reverb, on the first track “We Don’t Belong,” they seem to come up for air and more to the forefront. This trend continues on and off throughout the album. The thick fuzz-bass strips down for a while, resurfacing later, usually in tandem with the throbbing bass drum. Other sonic elements follow suit, allowing room for each to have its moment. They use this room to play more with the tension between its instruments.

The song that I really keep coming back to is “My Confession.” Maybe it’s the startling introduction of the very present acoustic guitar, but this song has an Angels of Light intensity to it. Jake’s voice, which drops an octave or two, picks up some serious delay, giving the song a morose, almost funereal quality. Yum! The acoustic guitar continues through Station #4, in which its stark contrast against the tachycardic drum beat and 80s synth melodies have a more of a Cure-like component, which although still melancholic, is more danceable.

SVI. My Confession.
And hey, if you’re looking for a darkwave rave, “Rx” brings it back. Fuzz base, check! Throbbing bass drum, check! Dance floor polyrhythms (hey, tambourine, I’m looking at you), check! And yeah, the cool, saturated vocals, check again! The final track, “Night Trip” is a bit of a tease, but one that summates Strange Behavior eloquently. At first you think you might still be on the dance floor, but it pulls you right back, intermingling sad melodies with a jittering rhythm section. Like Strange Behavior it pits nakedness and space against SVI’s familiar excessiveness and comes through with the goods.

Posted by When The Sun Hits - All things shoegaze. at 7:30 AM