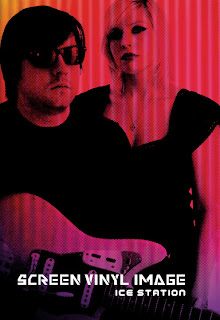 
Screen Vinyl Image are Jake and Kim Reid, a husband and wife team who were both former members of the now-defunct Alcian Blue (an incredibly talented shoegaze/new wave influenced band that parted ways in 2006. If you don't know Alcian Blue, I recommend you rectify that mistake immediately).

As a big fan of Alcian Blue, I was sad to see the group end, but from those ashes rose Screen Vinyl Image (the other members of Alcian Blue also went on to do excellent projects of their own - Vacuole Eyes, The Antiques, Torsion Fields and A Cricket in Times Square, to name a few), and this, my friends, is a very good thing, indeed. SVI's first release in 2007, entitled The Midnight Sun EP, was so incredibly promising that my no-more-Alcian-Blue pity party came to an abrupt halt. All things change, and evolution makes the world go around. Besides all that, and for lack of better phrasing, SVI essentially kicks ass.

Since the release of The Midnight Sun EP, SVI have gone on to release a slew of ever-more well-crafted releases, including the Chaser single (2007), a Split EP with Ceremony (2008), Interceptors (full length, 2009), and an album of remixes earlier this year. Every release leaves me more and more impressed (and I am not easily nor repeatedly impressed, I assure you). And not only do Jake and Kim consistently dazzle as SVI, but they also run the independent record label, Safranin Sound and Design, with a venerable roster of releases from bands such as Skywave, Ceremony, the Offering, the Antiques, the Vera Violets, the Vandelles, Safe as Home and Vacuole Eyes. These guys are creating and releasing some of the finest dark-tinged shoegaze around right now. Better recognize. When The Sun Hits is all about keeping a finger on the current pulse of shoegaze. Grab a wrist, people, because here it is. 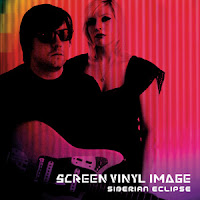 The Ice Station EP is the band's most recent effort, issued first as a limited run of 200 red-tinted cassette tapes, and will be followed by the Siberian Eclipse 7″ this fall (both on Fan Death Records).

The Ice Station EP consists of two new tracks, "Siberian Eclipse" and "New Visions", as well as live tracks from the band’s May 2010 show with Spectrum at the Velvet Lounge in Washington, DC, and a few other songs from The Ice Station (SVI’s own studio) sessions. An additional track, "Too Much Speed", is also slated for release in the fall on the Custom Made Music label.

The cassette starts off with "Siberian Eclipse", and is an excellent example of SVI doing what they do best - a powerful and seamless blend of frigid electronica, dark shoegaze, and psychedelica, with a tinge of post-punk thrown in for good measure. Far from a rehashed melting pot of these genres, SVI combine these influences to create sonic soundscapes that are as fresh and vital as anything they've ever done. "Siberian Eclipse" is an aptly named track; it is as cold and ominous as it's title suggests. It wouldn't be out of place soundtracking the coolest horror flick you could ever hope to see. If you like your gaze on the somber side, with dark beats and attitude, this is for you. And if you don't like your gaze on the somber side, perhaps you should reconsider your stance. This song has a chilly, compelling atmosphere you aren't going to forget. Nor will you want to. Had Ian Curtis lived, I could easily imagine Joy Division creating an early prototype to this sound.

As if I wasn't already pleased enough by this, then comes "New Visions", quite possibly the best SVI track I have yet heard (which is saying a lot, considering how highly I regard everything I've heard by them). It is a synth and sequenced-beat driven track, still encapsulating the darkness SVI do so well, but there is also an upbeat, almost hopeful undertone to it. After all, after an eclipse, the sun does inevitably return. New visions appear. The vocals, while gorgeously delivered, take a backseat to the ambience of the track, bringing to mind some of the more restrained and distorted vox of certain the JAMC tracks. "New Visions" is nearly epic in scope of sound. If "Siberian Eclipse" could soundtrack a horror film, "New Visions" would play during the rolling credits.

I really couldn't speak more highly of this release, and that goes for all previous SVI releases as well. I eagerly await future releases from them. Screen Vinyl Image is, quite frankly, one of the most exciting and talented bands releasing their own unique brand of shoegaze music right now.

The band has also been touring recently, and here are the remaining dates I have available at the moment (stay current with their goings-on via their facebook page):

When The Sun Hits also has an interview with the band coming later today. Stay tuned.

Check out the video below; SVI doing "Fever" from the 2009 release, Interceptors.

Review by Amber.
Posted by When The Sun Hits - All things shoegaze. at 9:41 AM