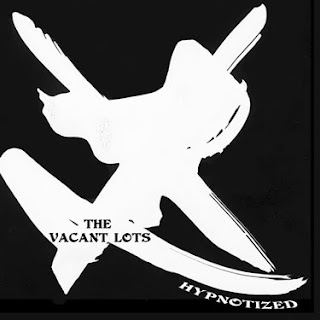 From the bands MySpace page:

The Vacant Lots are a psychedelic band hailing from the Northeastern United States (Vermont to be exact) and comprised of two members: Jared Artaud (vocals, guitars) and Brian Macfadyen (drumming). The sound these two conjure is a massive psychedelic wall of Indian raga and Velvet Underground drone/noise. They sound like Spacemen 3 had a child with Iggy Pop. They are just an amazing amalgam of all the right influences and originality. Totally classic,yet totally hip and relevant. In my opinion it's one of the top psychedelic releases of the year!

I usually go with a song by song description of what ever album I am reviewing, but on this occasion it just doesn't feel right. Mainly because the album is a solid statement and I feel it would take away from the overall work. It is indeed a rare thing these days for any band to release such a solid album, but The Vacant Lots have done just that. Hypnotized is like the soundtrack to the best 60s B movie you have never seen. It is film noir for the ears (these guys have to be huge David Lynch fans). At once dirty and forbidden, yet still refined and cerebral. A balance that most good psychedelic bands strive for, but rarely achieve ( The Brian Jonestown Massacre being one of the only bands in recent memory). Hypnotized is as druggie as Spacemen 3 and as brutal as The Stooges.

With song titles like "Confusion", "Highway", "When The Lord Comes" and "Revolution", The Vacant Lots take you on a wild ride of carnage and drugged out debauchery. What more could any discerning psychedelic connoisseur ask for in a release?!?! If you dig your music darkly tripped out with a touch of the ole ultra violence, this is definitely your album.

The Vacant Lots have managed to transcended time and place to the point that Hypnotized could have been released anytime between 1966 and 2010.It is classic songwriting with modern style,lots of style!How many bands can you say that about?With a definite debt to The Velvet Underground, Spacemen 3,Warhol and Burroughs the Vacant Lots have carved out their own niche in an age that is overwrought with pretenders to the throne. I get the feeling that The Vacant Lots are the real deal and I will definitely be keeping and eye on them.

Hypnotized gets 5 out of 5 stars. A solid, solid effort!