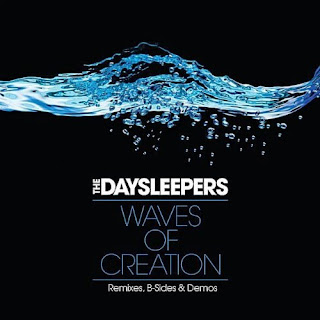 Answer: All I can do is try!It is easy to find positive things to say about such a great band. The Daysleepers are, without question, one of my favorite bands(so I am a bit biased!) and continue to be miles ahead of the modern Dream Pop pack. Not only do they write amazing, beautiful songs, but the production is impeccable. It is a continuous chill bump fest when I listen to their music. I don't know why they induce such an overwhelming sense of.......(awe?) in me, but they do. I liken it to hearing The Cocteau Twins, Slowdive and The Cure's Disintegration rolled into one. It is AMAZING stuff! While I would prefer a new full length album, this will have to satiate us fans for now, and it does so very well!

Waves Of Creation is a b-sides, remix and demo album and is available through CD Baby and Amazon.com. The opening track is called "Alone In The Universe (Unreleased B-side demo)" and it is a stunner. Not sure if this was recorded for Drowned In A Sea Of Sound or one of the 2 EPs, regardless it is a winner! Wow, what a song to leave off ANY release! It opens with a synth- like wash of dreamy guitar and a pulsating dub like beat. Jeff's voice is full-on dreamy and is really a major part of their sound. The song just kind appears........like a wave. It is a ghostly, ephemeral daydream. Like watching a dandelion come apart in a summer breeze. Beautiful.

Track two is "Summerdreamer (Wave Plant remix)" and is quite startling at first listen. If you are used to the original version that appears on Drowned In A Sea Of Sound, you are in for a surprise! It starts with a pulsating trance-driven beat, and the guitar is sliced and choppy. It almost sounds like someone is using a kill switch on the guitar part, but I'm sure this is just the remixing (or sampling?Not sure-ed.). Elizabeth Kandefer's voice is as beautiful as ever. It has the quality to transport you out of the mundane, angry world into a sunset filled dream where everything is melancholy perfection. She is a fantastic vocalist and makes the song something else entirely. Magical. The remix, with its bleepy, video game like sounds, actually doesn't take away from the overall vibe of the original. Ace remixing! I would call it a bliss beat beauty. An A+!

Track 3,"Big Sleep (Soviet's New Wave Remix)", comes from the Hide Your Eyes EP and is another surprise! The original is a great Dream Pop song and has always been one of my favorites from the EP. This version, on the other hand, is now my favorite! It is straight up Post Punk/New Wave. It could have easily been released in the early 80s and would most likely been a smash hit. It has a definite Depeche Mode/Human League like vibe to it. I was amazed the first time I heard it, well.....more blown away really! Just a perfect remix to an already great song. Soviet really brought something else out in The Daysleepers sound. I am really,really impressed.

Track four is "Lovesparkles (Home Studio Version)" and sounds better than most band's proper releases! I actually like this version better than the Drowned In A Sea Of Sound version. It has an airy, less dense quality to it. I love the drum sound on this. It almost sounds like two snares on the intro instead of the standard bass/snare combination! Jeff's voice is more pure sounding and the guitar tone is very reminiscent of Lush. I have dubbed this guitar sound the "Christmas Tree Light" sound. It always evokes coloured, blinking Christmas lights in my minds eye. I don't know why, it just does. It is a combination of Chorus, Delay and Flanger and is perfect on this track. I can't imagine a better guitar sound. Something about the mix is less muddy than on the full length version. It improves on that interpretation by a mile. A+!

"Mesmerize (early studio demo version)" is up next and was originally released on the Hide Your Eyes EP. It is neat to hear these songs in the gestation phase. The mix on the "Mesmerize" demo is slightly less hot and the vocals aren't finished. I miss hearing Elizabeth's voice. Nonetheless, it is a great song. It is not as good as the version on the Hide Your Eyes EP, but interesting to hear in this early form.

Track six is an intsrumental entitled "Garden" and is an unreleased demo. You can definitely tell it's a demo too! It has a distorted, unrefined 4 track quality to it that I like, but some may be turned off by. Again, a great melody and a great vibe. The only thing that could make it better would be the quality of recording. As an unreleased demo it is fantastic! Actually, it's fantastic period. I love it.

The closing track,"Atlantic Drift (original demo version)" ,is the only track from The Soft Attack EP to make it onto this release. I again think this version is better than the released version. There is a purity in the demo that just doesn't come through on The Soft Attack EP. I have often read that artists have a hard time reproducing the original vibe of a demo, and the same may be true here. Whether this is the case, or not is a moot point when you hear either version of "Atlantic Drift". It is such an amazing piece of music that the mood of the song on both accounts is close to perfect. It definitely swallows you with its beauty and drowns you in sound. Drift you will in a gauzy dream. A great closing track. Another A+ effort.

With this release, The Daysleepers more than appease long time fans, but the wait until a new full length is going to be difficult!I guess this will have to assuage, and it does so nicely. It is great to hear these early demos and the remixes are just ace. I'm glad we didn't have to wait until a box set or anthology to get this stuff. Great job guys. This EP is an all around winner. I give it 5 out of 5 stars.