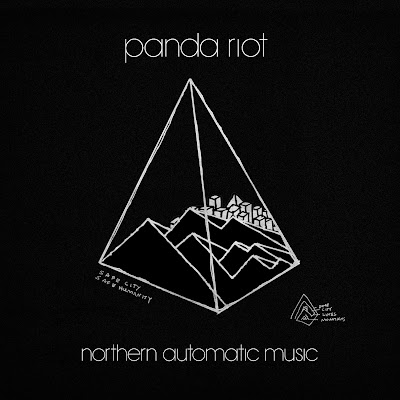 If you’ve encountered Panda Riot before, you probably have a pretty good grasp of their formula: buzzy backing guitars, fairly minimal drums that make frequent use of tambourines and shakers, glistening synthesizer voices, and remarkably direct and clear vocals for a shoegaze group. Fortunately, it’s a good formula, as Panda Riot hasn’t really changed it much between 2007’s She Dares All Things and 2013’s Northern Automatic Music. That said, the album does briefly flirt with some different directions for the group, particularly on the album’s second track, “In The Forest (Some Kind Of Night Fills Your Head.” My jaw actually dropped and I was in quite a euphoric mood upon hearing the track; I found its blend of almost dirge-like instrumentation behind very wistful vocals to be intriguing and rousing.

I would describe the majority of the album as being wistful and whimsical, actually. There’s a definite sense of innocence and a mostly playful attitude throughout. In addition to “In The Forest”, and in contrast to its obscured sense of hope, I would also place the brief and incredibly melodic “Golden Age” as one of the more joyful, rapturous moments on Northern Automatic Music. It speaks of a sense of love, of a very daring energy full of light.

The band manages to sneak in some interesting twists and hooks as well, a good example being the claps and distorted piano break near the end of “Camden Line.” The change in timbre and dynamic is a welcome breath. However, in spite of such clever moments, the album as a whole does drag as most of the songs blur into one another with little distinction. I would consider it as decent background music, and could easily, gladly, and enthusiastically recommend buying a few select racks, but I found the complete work to be kind of lifeless, even though it is blissful and bright.

A lack of distinction between most tracks is a misstep on an album that I can’t easily forgive, and one would expect a few more departures from a band’s routine after six years of songwriting. Bluntly put, Northern Automatic Music is pleasant, but I would advise potential buyers to tread with caution and to consider what they might be getting. If you’ve been absolutely enthralled with what Panda Riot has done before and don’t want them to change a thing, you’re in phenomenal luck. If you hoped they’d branch out with this effort, what you’ll hear may not meet your expectations.

Overall Evaluation:
7.0
Standouts:
“In The Forest (Some Kind Of Night Fills Your Head)” and “Golden Age.”
Goes Great With:
Asobi Seksu
Pinkshinyultrablast
My Bloody Valentine
The High Violets

Posted by When The Sun Hits - All things shoegaze. at 9:20 PM