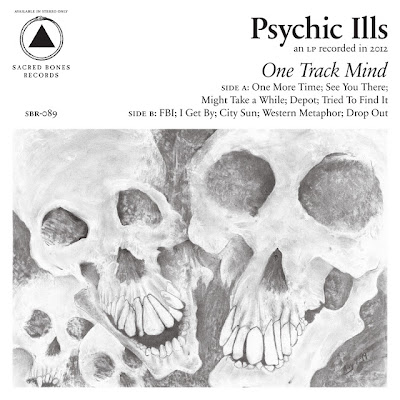 
One Track Mind, released in February by Sacred Bones Records, is the fourth full- length release from Brooklyn psychedelic stalwarts Psychic Ills. It’s the second LP to reflect the sharp transition in the band’s approach to composition and record-making that we first heard embodied on 2011’s "Hazed Dream" LP.

Before "Dream", the band tended to source their songs from collective explorations and improvisations, “the whole band jamming and kind of pulling things out of that” as bassist Elizabeth Hart put it in Interview magazine. These methods, as one might expect, often yielded lengthy tracks, with several 8 to 12 minute opuses distributed across Psychic Ills’ first two full-lengths and the 2010 EP "Catoptric".

At some point after their third LP, "Mirror Eye", much of which was improvised in the studio, the band felt that they had taken this approach “as far as we could take it,” Hart said, “and wanted to try writing music in a way that was more unfamiliar to us, actually writing a song and not some kind of improvised approach.” With "Hazed Dream" then, a new modus operandi had been set into play, one in which guitarist/vocalist/multi- instrumentalist Tres Warren brought material written in advance to the rest of the band. (By this point the lineup had become the present trio of Hart, Warren, and drummer Brian Tamborello.) Hence the more conventional verse-chorus songcraft and more compact offerings of the last two LPs, both of which still retain a hypnotic, drone-underground atmosphere and manifestly psychedelic ornamentation...


Read the rest of the review HERE.

Posted by When The Sun Hits - All things shoegaze. at 4:15 PM