New Video: “Streets of Fire” from Symmetry/Themes For An Imaginary Film by Johnny Jewel of Chromatics and Glass Candy + Full Stream of Symmetry. 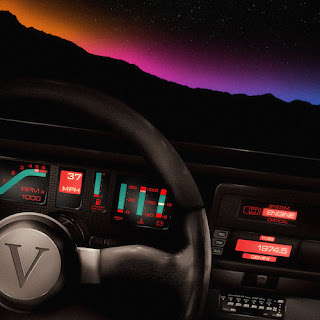 Here’s a beautiful dreampop track titled “Streets of Fire” from Symmetry/Themes For An Imaginary Film, a 37-track, nearly two hour piece recorded by Johnny Jewel, of Chromatics and Glass Candy, from April 2008 through May 2011.

The entirety of Symmetry can be heard on Soundcloud here:

Over the span of thirty seven tracks, Symmetry embraces the elegance of European noir cut with a lean & violent American razor. Directly in your face & breathing down your neck one minute, & escaping beyond the night sky the next. The attention given to color & detail on these recordings is more graphic than musical. More visual than aural. With no flashy virtuosity to clutter the mood, the album's pulse thrives on the empty pockets of space left in the wake of throbbing bass & the faint flicker of electro candlelight. Minimal, strict, & always in motion, there's an oppressive overtone throughout the record that winds itself tight as a clock. Johnny Jewel & Nat Walker (Chromatics & Desire) give us propulsive moments that are more rhythm based than Pop, & less reliant on a lyrical presence than their other projects.

A lot of computer screens have flashed rumors of Jewel's synthesized score for Nicolas Refn's Drive this year. Symmetry isn't his score for Drive. These tracks date back to 2008 when Jewel was working on Farah's Into Eternity album. Some of the other tracks are the first things Jewel & Walker worked on in Montreal before Desire was up & running, & while Chromatics as in hiding after the success of Night Drive. As Jewel says: "We were just spending all night in a trance with not enough sleep, exploring space, rhythm & tone."

With repetitions in theme like hi hats dressed as stopwatches, and bass lines mimicking the pumping of blood, the statement of Symmetry is in the understatement. Dueling themes permeate & mirror the entire album. Feminine / Masculine. Space / Density. Bass / Treble. Tension / Release. Love / Isolation. Taking cues in texture & ambiance from American composers John Cage, Morton Feldman, & Glenn Branca, while applying the more cascading & visual concepts of European composers Maurice Ravel, Gyorgy Ligeti, Erik Satie, & Karlheinz Stockhausen. We hear all of these elements through the veil & color of analog synthesizers & rhythm machines from the early 1970s, resulting in the suspenseful & patient territory pioneered by the hands of John Carpenter, Claudio Simonetti, Wendy Carlos, Klaus Schulze, & Krzysztof Komeda. Symmetry is not Pop. Stripped it to its most primitive & visceral core, this is music written for picture. Your life is the film & this is the soundtrack.

Themes For An Imaginary Film Recorded
April 2008 Through May 2011