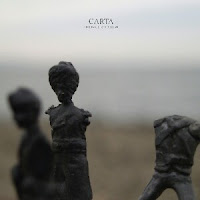 Recorded over an unusually stressful period for the band (family members with cancer, death, rehab, and divorce), there was a desire to abandon previously established templates and try something new . Paranoid inner-vacuum micro-dub and ruminative post-space hypno-drone? The first Carta album to feature vocals throughout, the band soaked in influence from Young Marble Giants, Disco Inferno, and latter day Hood, with electronic elements giving lift to the songs, and members swapped instrumental duties around as the songs called for it.

The Faults Follow was recorded by the band at home and at Studio 3431, and was mixed by Jay Pellicci (the Drift, Deerhoof, Death Cab for Cutie) at Tiny Telephone in San Francisco.


Carta’s first release under the Saint Marie logo can now be pre-ordered on CD or vinyl here.  Enjoy the following review of The Faults Follow, penned by our friend and fellow music junkie Elizabeth.

This San Francisco ensemble defies categorization, mostly because they use a kitchen sink approach and employ many different musical styles in their gorgeous melange of sound. I’ve read the press kit and numerous glowing reviews from music writers, and they compare Carta to many bands I’ve never listened to. So maybe I am starting from a disadvantage here, or possibly it’s a plus that I don’t have preconceived notions of what it’s supposed to be.

Like Hammock and other instrumental bands, Carta evokes emotion from their sound rather than from their words. Vocals are almost an afterthought, though guest vocalist Odessa Chen’s lilting voice is clearly in the foreground on “The Iowa Fight Song.” Through death, divorce, and illness, they’ve managed to pull off something that is beautiful yet challenging. It unveils itself over time and reveals many-hued layers of complexity, yet it can also be boiled down to simple melodies...

Posted by When The Sun Hits - All things shoegaze. at 6:23 PM