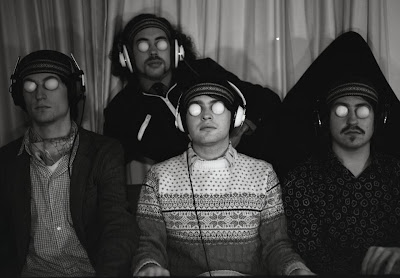 
Jetman Jet Team grew from the ashes of The Pop Eccentric, a group formed by Miguel Diaz, Brenan Chambers and Tyler James in Spokane Washington. After a break up and subsequent moves around the country, the noisy guitar pop group reunited as Jetman Jet Team in winter 2011. A collective move to Seattle saw the addition of Alisa Dickinson on vocals and Quin Dickinson on drums.

Compared to Flying Saucer Attack and The Jesus and Mary Chain, Jetman Jet Team mixes a psychedelic drone and fuzz with screaming spaced out guitars to form a powerful noise pop, lush in atmosphere with krautrock hints.

On their Facebook page, the band describes themselves as "mods from Neptune" and under "influences" they respond simply with "Have you ever tried DMT?" They had us at Neptune, but it was true love at the mere mention of a tryptamine compound...

How and when was the band formed?
The band was formed in 2008 under a different name, in a different city. Brenan (me) met Miguel through a mutual friend whom he was making music with at the time. We got together and formed The Pop Eccentric. We played a few gigs around Spokane, split up a year later when I moved to Seattle. Later in early 2011 we started trading tracks online (Cosmic Age, Corrosive), I drove to Coeur d'Alene Idaho, finished recording those tracks. We needed a drummer, so we called up an old friend Quin. We liked the tracks and eventually decided to get back together with a new name in a friendlier city. Our bass player Tyler was living in Portland, Quin in Spokane, Miguel in Coeur d'Alene, and Brenan and our keyboard playing Alex were in Seattle. They ended up getting a house later that summer together in Seattle and that's where we finished recording the album.

Can you tell us what the band has been working on and what you've got forthcoming in the near future (new releases, tour, etc.)?
We've got a small west coast tour this August and 2 limited cassette tape releases coming up with some more experimental, instrumental stuff that’s pretty out-there. Other than that, it’s been pretty low key at the moment. Slowly working on some new tracks and trying to expand our live sound.

Do you consider your music to be part of the current shoegaze/dream pop scene, or any scene? Defining one's sound by genre can be tiresome, but do you feel that the band identifies closely with any genre? How do you feel about genres in music, in a general sense?
I think we fit in with the scene, but something about our approach feels different than a lot of other bands. We don't take a load of tracks and go into a studio and make an album. We do everything ourselves, over time, and just sort of say it’s done when we feel like it’s done. We don't really identify with any one genre in particular or go out of our way to sound like anything, but I can understand why we get labeled what we do. I don't really mind genres. I know some people can be really snooty about what they call their music, but I don't really give a shit either way. We're going to make the music we want to make regardless of what it’s called, so if it helps you describe it to someone as shoegaze, then sure, call it that. 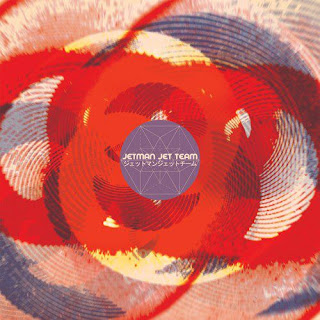 What do you think of modern shoegaze/dream pop/psychedelia artists, any favorites?
We really like Pia Fraus, Serena Maneesh, Keith Canisius and The Stargazer Lilies.

What is the most important piece of gear for your sound? Any particular guitars/pedals/amps that you prefer?
Our sound really comes out of digital fuzz. Most of our sounds are created in the computer and have to be, sort of, emulated live with pedals. I don't think there's any one tool that's perfect, you can get a great sound from mostly anything if you put in the time. Having said that, I do really love Lexicon's reverbs. I know Miguel really prefers solid state bass amps for his guitar fuzz.

What is your process for recording your music? What gear and/or software do you use? What would you recommend for others?
90% of our music is done as a collaboration, usually through the internet. Almost all of our recordings we're done without amps and any out board gear, just done internally through Ableton, with the exception being cassette tape. We record a lot of tracks onto old cassettes and back into the computer. It was really easy to send entire songs and have someone easily add or manipulate parts without having to worry about studio time, cost, changes in recording tone, etc. It's generally not how most bands like this approach their recording process, but I think the benefit is you have total control over absolutely every sound your hearing, anything can be fairly easily changed at any time. We all love Ableton for its recording, and it’s got so many tools it can really be used as an instrument itself. So yeah. Ableton. Go get it. It’s great.

How do you feel about the state of the music industry today? There is no doubt a massive change underway; how do you see it and do you feel it’s positive at all?
It's positive in that the internet has made it possible to basically hear anything, whenever. You can argue stuff about piracy, etc., but all I really care about personally is exposure, and being exposed to others. We're young, both as a band and as people, so it doesn't really feel like a change to us, it's just the atmosphere we came into.

When it comes to label releases versus DIY/bandcamp and the like, what is your stance, if any?
We're fully supportive of DIY for bands, both with recording and distribution, however I definitely don't regret all the benefits of signing to a label.

Do you prefer vinyl, CD, cassette tape or mp3 format when listening to music? Do you have any strong feelings toward any of them?
We don't really care. I like digital a lot, it’s convenient. Sure it’s not as cool or fun as vinyl and tape, but hey, whatever - it sounds good and it’s easy. However, there's something really special about the aesthetic of cassette tapes, but really it’s the shittiness of it like we like so much so I wouldn't say it’s the preferred format for casual listening, but baby does tape sound gooood. I could listen to the disintegration loops for hours.

What artists (musicians or otherwise) have most influenced your work?
The fuzzy ones and the ones that go bleep and bloop. And that guy who wrote the Family Matters theme song.

Can you tell us a little about what you are currently into (books, films, art, bands, etc.)?
We've been listening to a lot of Ghost Box stuff, Oh and nonstop Takako Minekawa, can't get enough. François de Roubaix. Some really silly stuff like old European synth-pop. We just got a new Korg and a Moog so we've been dickin around with synths a whole lot lately. Watchin lots of documentaries. We've actually got a short film were going to shoot soon in a nuclear cooling tower. Stay tuned.

If you had to choose one track that was the ultimate definition of your sound, which would it be and why?
I'd say the song that defines our sound is Cosmic Age, its got fuzziness and sounds nice loud. It’s got some atmospheric stuff at the end, and overall gives a pretty good impression of what we do.

Can you tell us a little about the band’s song writing process?
We just write and write and are always recording crap. Usually a song develops when it gets uploaded to our cloud or it gets passed around and someone else hears it, likes it, and then we just go all the way with it. All the way and all the way back. There are few songs that were done entirely by just one of us, but that's pretty uncommon. Drugs and alcohol help a lot, but sometimes all you need is pep in your step, a dollar in your pocket and a beautiful super model girlfriend who can write the songs for you. A lot of songs come out of just messing around with guitar tones, trying to find new sounds or textures or whatever, then you just sort find yourself making shit up, then you realize you've got something song worthy.

What is your philosophy (on life), if any, that you live by?
We don't like a glass half empty or half full cos the whole point is it’s supposed to be in my stomach. 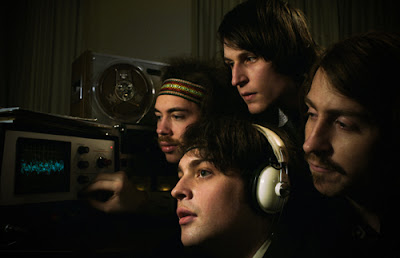