Artist Interview: Jaike of The History of Colour TV. 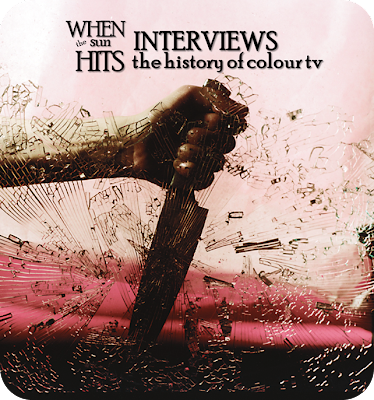 Created as an experimental solo project and gradually developing into a band around a series of self-released singles and EPs, The History of Colour TV’s songs advance in cascading duels of pop-sense versus noise-texture. Propelled by a sonic charge of over-driven guitars, primitive drums and synth-induced soundscapes, the band interweave themes of sorrow and euphoria to form a glimmering evocation of a daydream, in which the past has yet to be and the future has been forgotten.


How and when was the band formed? The band was formed in Berlin, and that’s where we’re all living at the moment. I had been using the name The History of Colour TV since January 2010 for what I thought was to remain a solo project, but moving to Berlin changed that: I met with some like-minded people and the solo project gradually morphed into a full band, and became more focused in terms of its musical direction.

Can you tell us what the band has been working on and what you've got forthcoming in the near future (new releases, tour, etc.)?   Right now we’re taking a break from playing shows to focus on recording essentially what should become our second album. It’s likely that we’ll be releasing a single sometime after the summer, so we’ll be playing shows again then and most probably be presenting some of the new songs live.

Do you consider your music to be part of the current shoegaze/dream pop scene, or any scene? Defining one's sound by genre can be tiresome, but do you feel that the band identifies closely with any genre? How do you feel about genres in music, in a general sense?   It’s a delicate subject for us, because although people generally tend to talk about our music as being directly linked to the Shoegaze scene, 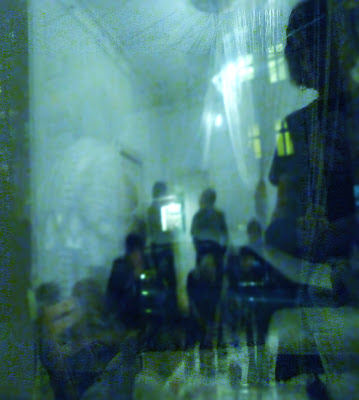 current and past, we really consider that to be just one of several influences and aspects of our music. We are huge fans of My Bloody Valentine and Slowdive, and it’s nice to have your music be favorably compared to those bands’ pioneering work. But when the description stops there, it feels like a short-cut been taken. As soon as music has some reverse guitars and reverb it tends to get labeled ‘shoegaze’ and occasionally perceived to be simply derivative of the music of that original scene, if there ever really was one. But if I make some mental space to compare our album to say a selection of key MBV tracks, I don’t really see a huge connection there, sound-wise and songwriting/structure-wise.  At the end of the day it’s subjective, and it doesn’t really matter as long as you as an artist are being honest with yourself, and making music that’s an expression of who you are. One of the problems with categorizing music by genre, especially with something as nominally specific as Shoegaze - which I think some people are immediately curious about hearing while maybe others are immediately turned off by - is that any given Shoegaze band’s music would probably appeal to people beyond those stylistic boundaries.  I was recently talking to a concert promoter in Germany, really nice guy, who told me that he loves Shoegaze but that he really dislikes My Bloody Valentine, which was pretty entertaining.


What do you think of modern shoegaze/dream pop/psychedelia artists, any favorites?  Some favorites are Screen Vinyl Image, Lovesliescrushing, Pink Playground… Fabels have an interesting thing going, a nice mixture of styles of which one you might call Shoegaze… And though they don’t release anything under that name anymore, Slowhazel. Their track "Edge Of Yr Knife (Live)" is probably my favorite example of a modern take on the Shoegaze aesthetic. They’re really pushing the recording to the point of abstraction. It’s such an interesting process by which there’s a recognizable tune, but it’s on auto-destruct, eaten up by the sound that's being used to convey it.

What is the most important piece of gear for your sound? Any particular guitars/pedals/amps that you prefer?   On a purely technical level, the AKAI MPC1000 is pretty central to our setup. Markus uses his kit to trigger a lot of the synth and drum sounds from the album, which are all loaded into the sampler. Graeme has a few secrets lined up on his pedal board which result in a pretty crushing bass sound; he rates the Z.CAT fx pedals pretty highly. We used the Digitech XP300 a lot on the album, and live also. That has a very identifiable sound. And I couldn’t be without a Cobra overdrive, which was built by a small french company called MOJO, and which as far as I’m concerned is irreplaceable…

What is your process for recording your music? What gear and/or software do you use? What would you recommend for others?   We recorded the first album ‘digitally’, but with the next recordings we’re trying to shift back to doing as much in the analog realm as possible. This implies a few more limitations, but really, it just means making key decisions earlier on in the process as opposed to later in post-production. In fact we have a pretty specific way we’re trying to proceed with this album, and if we can pull it off, it will essentially mean that there will be little or no post-production, no actual ‘mixing’ sessions. Kind of touching wood on that one…


We used some simple but effective gear on the first album. Old German broadcast pre-amps and mixer, standard but decent microphones, nothing too fancy, and recorded into Logic 9. I feel that recording, digital or analog, is all about making the right decisions in the context of what you have at your disposal. But in the digital realm specifically, trying to minimize the amount of processing you subject your audio to is essential. Again, it’s all a bit subjective…

How do you feel about the state of the music industry today? There is no doubt a massive change underway; how do you see it and do you feel it’s positive at all?   It seems like the change we’re witnessing will be on-going for a while to come. It might be short-sightedness, but I can’t really see how one particular model will prevail in a major way over any other, in the sense that the technology involved, the media and platforms are also constantly evolving. For good or for bad, depending on who’s side your on. Here in Germany, the local royalty-collecting agency GEMA has been annoyingly successful in their dispute/deal with YouTube for example, to block certain copyrighted materials from streaming on that site. It’s a pretty strong reminder of how the internet can be controlled differently depending on where you are in the world, and as an extension, that the battle to avoid it becoming some kind of proprietary system is likely to intensify. 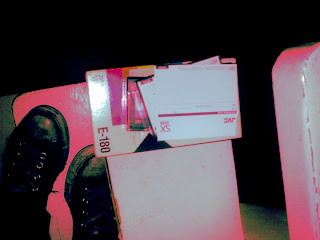 In terms of the industry… I would have to think about what the expression ‘music industry’ means right now, what’s included under its definition. It’s a little blurry. Surely Bandcamp has to be counted as being part of the music industry, but is a band recording DIY, etc, and releasing their music on Bandcamp considered to be a part of it too? If you look at it in a romantic way, maybe it’s comparable to the situation where big companies were selling lots of blank cassettes throughout the 80s and 90s, but bands putting together their own sleeves and albums and selling their tapes on a smallish scale were circumventing the ‘music industry’. The obvious difference today is the amount of people you can potentially reach, the quantity and rapidity of connections that can be made from one listener to others, the way 'mainstream' and 'underground' are visible on the same page and platforms, next to one another. That’s amazing of course, and it’s easy to get lost in the amount of stuff out there. But it also reinforces my fascination for how things worked in a previous age, with photocopy machines, mailers and stamps, how the early hardcore and independent scenes and labels developed in the 80s, and how much passion went into all that, both in terms of the creators and the listeners. Not to say things were systematically better in the past, but now it just seems hard to imagine it was ever possible.

To finish on the theme of the current evolution of the industry, these subjects are almost always talked about in relation to revenue, how a piece of recorded sound can generate some kind of income and how we can maintain that as a reality in the digital age. The money-factor hasn’t changed that much, and if you take it away a lot of the debates become redundant.


When it comes to label releases versus DIY/bandcamp and the like, what is your stance, if any?   No particular stance, I suppose it’s all about working with the right people, collaborating in creative and constructive ways, whether it’s with a label or within a DIY collective etc. There is however something to be said about putting your own releases together: recording, designing the covers, cutting and folding them, turning them into finished objects. It’s a very satisfying experience. And one that’s not incompatible with working with a label of course… 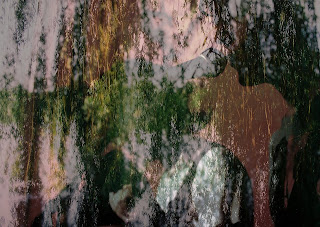 Do you prefer vinyl, CD, cassette tape or mp3 format when listening to music? Do you have any strong feelings toward any of them?   Vinyl is my favorite format. It’s fun and bold and fragile and generally sounds good. CDs are cool because they can also be used as mirrors.

Can you tell us a little about what you are currently into (books, films, art, bands, etc.)?   I’m currently obsessed with french novelist/essayist/philosopher Maurice Blanchot. Being able to read his works is probably the best reason to learn french. He remains a bit of a mysterious character, kind of a hermit, not very well known even in France. He also wrote a lot, and it’s pretty dense and time consuming, so it will be an obsession for a while yet. And he's a pretty big influence somehow.

If you had to choose one track that was the ultimate definition of your sound, which would it be and why?    Probably Colour TV, the first song of our first EP. The fact that it’s called ‘Colour TV’ is more to do with its thematic contents than with the band’s name. It was one of the first songs written for the band, and because the whole project was brand new, I could somehow also picture that it was coming to an end, that it had already come full circle and we were writing the full-stop. So it had to be epic and loud, but also melancholic and nostalgic. And somehow a lot of our music is like that. The video was cool too…


Can you tell us a little about the band’s song writing process?
There’s no regular way of proceeding. Although it’s usually a riff or a sonic glitch or a pattern/beat,  anything can turn into a song. Occasionally it’s a series of words, or a title, not so much in terms of subjects or themes, but more the images and tension it might evoke.

What is your philosophy (on life), if any, that you live by?
There’s a famous quote from Scanners in which one of the shadier scanner characters sits inside one of his sculptures and declares “my art keeps me sane”. It’s more of a statement than a philosophy, but it’s one that comes to my mind pretty frequently. It’s cool, both ‘art’ and ‘sane’ are somewhat relative, so you can go a long way with that one.

Posted by When The Sun Hits - All things shoegaze. at 2:30 PM