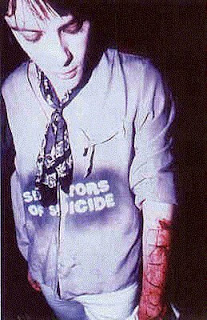 Richey Edwards, the presumed deceased (he disappeared on Febuary 1, 1995, though he was been allegedly spotted in India and on the islands of Fuerteventura and Lanzarote) rhythm guitarist and lyricist for the Welsh band Manic Street Preachers, has never been one to hold back his opinions. In fact, he is quite remembered for his tendency to spew bile whenever possible. He decided to speak for the entire band when he was once (in)famously quoted to say: We will always hate Slowdive more than Hitler.

Hm. Okay. Well, that is idiotic, but I thought, "Hey, it's Richey Edwards, this kind of thing is expected. I guess." His tireless attempts to be "shocking" always had quite the opposite effect on me - I am, in fact, a fan of early Manic Street Preachers, after all (though the lyric "I laughed when Lennon got shot" always made me want to roundhouse the guy), so most of the outrageous stuff he said was fine by me. After reading that his bandmate Nicky Wire once said, "I detest every other musician I've ever met," I started thinking: Well, these chaps are full of shit, aren't they?

Nevertheless, I suppose we can let the music speak for itself. The following is one of my favorite Manic Street Preachers tracks. Let's see how it holds up today.

Yeah, okay, I still like this song. It's kinda fucking cheesy, but it always was, and that's why I liked it anyway. It's a fun pop track. Could I go the rest of my life without hearing this song ever again and not care? Absolutely.
Now, let's compare the MSP track to a random Slowdive track. I'm thinking of "Avalyn 1" right now, so I'll go with that.

Slowdive. Avalyn 1.
To me, the choice is obvious, but I'll let you decide.

(There were initially paragraphs of extremely unkind opinions about this that I'd written, not flattering to Richey Edwards/MSP at ALL, but WTSH writer Anas Al-Horani pointed out, correctly, that I was being mean. We try not to be assholes at WTSH! Sadly, I'm the only one that actually struggles with that.)
Posted by When The Sun Hits - All things shoegaze. at 10:28 AM